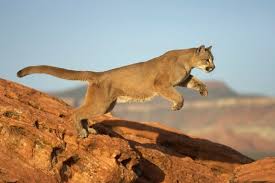 Perched high upon a frosted ledge,
Through painted leaves she spies a doe.
Crouching low with muscles taut,
Her tawny tail swings to-and-fro.
Steely eyes, unblinking stare,
Focused with unequalled skill;
She slowly raises unsheathed paws,
To dig in for a pouncing kill.
Behind her, rocky crags attest-
Another page in Puma’s tale.
Her echoed roars, her lengthy bounds,
Have oft entwined those hallowed hills.

For she is home in treeless lands, as well as scorching desert sands.
And forests thick with limb and bough, and fields that men have worked and ploughed.
And jungles, where the boas hang, have seen her fight with claw and fang.
In Rockies, where the bighorn leaps, on Andes- with the llama- sleeps.
She lives within the wolf pack’s howls; she feels soft wind from flying owls.
Her eyes reflect the northern lights; her ears detect the lemming’s flight.
On Amazon’s dark waters brink, where piranha’s bare victims stink,
The caiman casts a wary eye- when puma’s shadow passes by.
Mackenzie’s cold and icy flows receive her captive’s final throes.
On mountain heights and canyon rims, where rattlesnakes and vipers sting,
And fleeting goats on breathless peaks are no match for her nimble feet.
The pronghorn’s speed does not ensure that they’ll be safe on prairie’s floor.

When winter’s long, cold fingers close, and push the sap down maple’s toes,
And freezing time and capping poles; and filling holes of sleeping moles,
Still puma roams forgotten trails, where memories of the Huron fail...
For she, alone, remembers when; her realm felt not the feet of men.

For when the spring of man arrived and wagons brought the human tide,
And livestock pushed the bison’s range; and cities dotted fertile plains,
And preference to the cattle given; wild incursions unforgiven,
Her downfall was precipitated, by growing lusts insatiated.
For when does plenty not suffice? What can curb the wanton eye?
When will “wild” regain its place within the throb of human race?

So, is perched on frosted ledge,
A symbol with a painted hue.
Her autumn dawns- like white-tailed doe,
A white flagged raised for me and you
Her steely eyes no longer stare
On former haunts-nor former preys.
A famished hunter stalks the north
And wanders through the foggy grey.
The Rockies long for her fair song
Echoing through the canyon doors,
To see her graceful spirit pass,
And frolic in its halls once more.

But in the softened, lunar glow- ‘neath staring eyes of Manito,
When stillness creeps and dewdrops shine upon the spider’s silky lines,
Then Graceful Spirit- worn and spent; turns gaze towards the firmament,
And breathes her last enchanted breath, with blissful grace- embracing death. 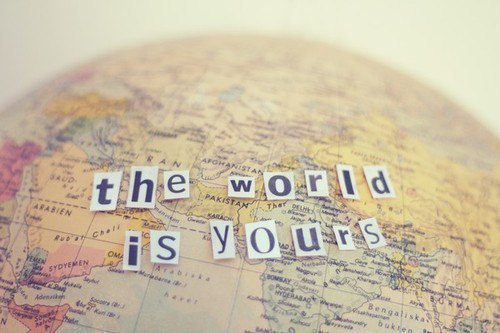 Travel, move abroad, read poetry, dring wine, and enjoy the finer places in the world. Make the world yours!